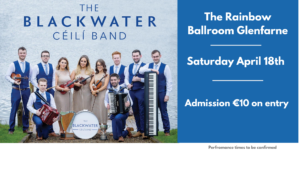 The Blackwater Céilí Band hails from the Clogher Valley region of County Tyrone, taking its name from the River Blackwater, which flows through the heart of South Ulster. The band was formed in February 2015 and consists of musicians from counties Tyrone, Monaghan, Down and Leitrim. They have become a well known and established band in the area and further afield over the past number of years, playing at various concerts, fleadhanna and céilís. Their music is firmly grounded in the Ulster tradition, and they strive to produce a lively and rhythmical style of céilí band music suitable for dancers & listeners alike.

Since their formation, the band have competed every year at All Ireland level until 2018, when the band made history and became the first Céilí Band from County Tyrone to be crowned All Ireland Senior Céilí Band champions at the Fleadh in Drogheda. This success has resulted in many noteworthy media appearances for the Blackwater, including two live TV performances on TG4’s Fleadh TV from both the Ulster and All Ireland Fleadhanna, RTÉ’s Fleadh Cheoil programme, and a special appearance on RTÉ’s Up For The Match in September 2018. Other memorable performances include a broadcast recording on RTÉ Radio One’s Céilí House, and a live performance to nearly six hundred family members, friends and supporters at their celebratory homecoming in the Valley Hotel, Fivemiletown.